Dentures were not an option for Janet

Janetâs visit to the Smile Savers Clinic in London was the culmination of six months of careful research, but within minutes she knew she had found the right dentist to fix her smile.

Her story began in her twenties when she felt some of her teeth were loosening. Her dentist explained that her that gum disease was the cause and that he thought it might be a hereditary problem.

Janet was told to look after her teeth the best she could and attend annual checkups but over time the condition of her teeth worsened. Like many people, Janet felt ashamed of her teeth and understandably she began to worry more and more. She managed to keep it all a secret by covering her mouth when she smiled and not sharing her concerns with anyone but her husband.

When Janet reached her fifties, she knew it was decision time. Loose teeth and bone loss meant she was about to lose her teeth and she needed to act. Her dentist had tried various treatments unsuccessfully and the only option now was dentures or a permanent replacement such as dental implants.

âDentures were not a choice I was willing to consider and I knew the treatment I needed was going to be extremely expensive in the UK,â explained Janet. She recalled seeing a television programme about dental tourism but Janetâs primary concern was finding a reputable dentist. Â Janet shortlisted companies with a clinic in London, and with good recommendations from newspapers and television, Smile Savers was her first choice. Â âI was made to feel welcome and all the staff were so friendly with a very professional approach. I felt very comfortable in their capable hands and the dental assistants were very caring and reassuring,â said Janet.

Janet had eight root canal treatments, 10 implants and twenty four crowns over a course of three visits to Budapest. âIn many ways it was harder than I anticipated, I had eight root canals in one afternoon which was intense but actually I was glad to have it done in this way. In the UK youâd be in and out of the dentist for short appointments for months and I would have found that very difficult to deal with,â explained Janet.

Dr Georg Gruming and Dr Attila Kaman did all of Janetâs dental treatment but she was impressed by the interest the whole team took in her treatment and in the work of their fellow dentists.

Now that the treatment is finished Janet feels on top of the world. Sheâs happy to talk about her experiences and is full of smiles after years of worrying about her teeth. âI know how lucky I am to have discovered Smile Savers. I donât have to worry about opening my mouth to speak or smile any more. It feels so good to not have to shy away from eye contact and covering my mouth up when talking to people,â said Janet. 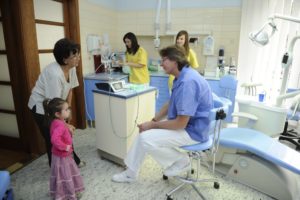 Going to the dentist can be daunting for some, but it is important to receive a full assessment, to talk things through with one of our clinical staff and to weigh up your options prior to travelling abroad or receiving treatment in London.

Our central London clinic is able to offer a full consultation where you will recieve a detailed fully costed treatment plan and get to meet the dentist that will treat you.

Once youâve decided which option is best for you, we will look at the most cost effective way to achieve the best outcome whether that be in London or in Budapest.

For major dental work, the most economical route is to have treatment in Budapest. Smile Savers will book your appointments, your accommodation, your free airport transfers and help with travel arrangements; our goal is to make your trip as smooth & easy as possible.Contact us nowto talk to our expert customer care team who can answer all your questions.

How Long Will My Treatment Take?

Cosmetic procedures, such as crowns and veneers, usually require one visit of 5 â 8 working days (depending on the number of crowns/veneers or bridges fitted).

Dental implants usually require two visits; the 1st is for 2-3 days with a follow up visit 3-6 months later when the implants have fully integrated. The second visit is to uncover the implants and have crowns fitted which can usually be completed in 5-8 working days.

If all your dental work is in London then treatment times will be longer. Your dentist will advise you of expected times and number of appointments at your consultation.